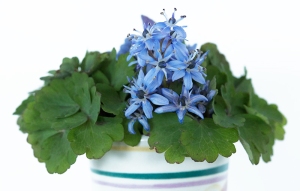 This year spring is a cold affair with a penetrating northerly wind imprisoning the landscape in monochrome frigidity. As I walk down to the cottage garden across the field there is not a daisy, celandine or dandelion with a floral offering to welcome Persephone to these norther shores. However, in the shelter of the garden the primroses are so abundant that I could not resist the temptation to pick enough for a tussie-mussie to take some spring sunshine into the house. Foliage is always in short supply at this time of year, but there are usually enough aquilegia leaves to garnish a posy and  there were a few sprigs of scilla to be gleaned from the orchard to complete the arrangement. 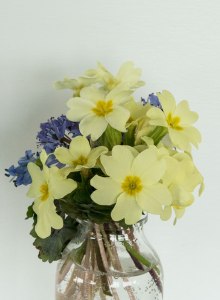 I often have good intention, but I rarely manage to contribute to Cathy’s In a Vase on Monday meme and so I was feeling quite pleased with the prospect of being able to contribute two very minimalist, small vases. This was fine until I realised that I did not know which species of Scilla I had picked.  This was my downfall as I was distracted from my original purpose. Not content to check the species in The European Garden Flora ( an invaluable work for every gardening botanist as it provides identification keys to cultivated ornamental flowering plants), I went back to the garden to photograph the scillas in the orchard and took the opportunity to photograph the Siberian squill (Scilla siberica) which were in flower in the walled cottage garden. I was now completely distracted and frittered away my time reading about the various species of Scilla, looking to see which species we were growing in the greenhouse and searching for photographs in my archive. Once again I was too late and my “in a vase on Monday”  became a ponderous posy.

There are over 90 species of Scilla which occur in Europe, Asia and southern Africa, of which I currently have two species naturalised in the garden, S. bifolia in the orchard and S. siberica in the cottage garden. The bulbs were purchased commerically, so I suspect that they are both named cultivars, particularly the Siberian squill which are a beautiful rich blue. Peversely S. siberica originates from  the Caucasus and south-west Russia, not Siberia. I did not have a great deal of success in finding the etymology of botanical name of the genus, except that it may be from the Greek skil’a, hence the common name of squill.

After the primroses the squills are the earliest of the bulbs to flower in the garden, but in the islands the native species, the spring squill Scilla verna, does not flower until May or June. It also has quite a restricted distribution in the Outer Hebrides, the east coast of southern Lewis and northern Harris, the islands beyond the southern tip of the Uists – Eriskay, Barra, Mingulay and some of the smaller islands, so it always a pleasure to find this very delicate species nestling in the coastal grassland.