With the promise of northerly gales and wintry showers it is time to harvest the tulips from the cutting bed. I had not attempted to grow standard tulips in the garden as I doubted that they would survive our cold, blustery spring weather and so concentrated on growing species tulips in pots in the alpine house. However, last autumn two redundant vegetable beds were converted into cutting beds to grow flowers for the house and holiday cottage and were planted with an assortment of bulbs. 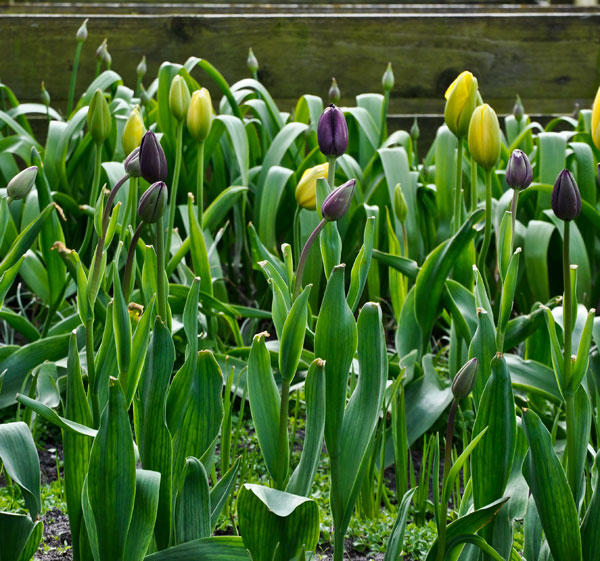 I was pleased with the result, although I felt the Queen of the Night was rather insipid, but I suspect that this is may be a due to my very alkaline soil. Now I have harvested the flowers I will give the bulbs a good feed and see if they can be persuaded to flower next year. I’ve still not decided whether to dig up the bulbs, “bake” them in the cold frame and  them put them in pots for next year. I suspect that the absence of hot dry summers may explain why so many tulips are reluctant to flower in subsequent years. The “baking” treatment certainly works for the smaller species and in theory it may work on the standard varieties.
For once I have some flowers for a Monday vase and can join Cathy’s meme. 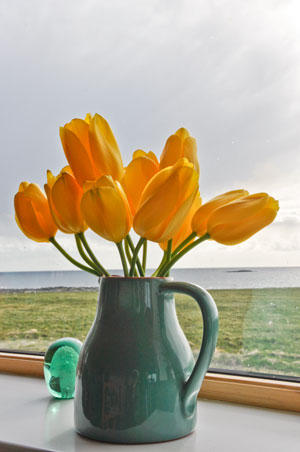 I’m not totally convinced that I have chosen the right variety – Big Smiles is an apt name, the beautifully golden yellow is enough to raise a smile, but the flower is perhaps a little too blowsy. Perhaps they would look better in a taller vase rather than a jug?
I think, on reflection, that I still prefer the smaller species and this autumn I will be planting Tulipa clusiana and Tulipera hageri in the cottage garden, as the Head Gardener is not convinced they are not worthy of space in the alpine house. I’m inclined to agree as clusiana is perhaps too tall for a pot and I was also disappointed in the colour of hageri which is more pink than the promised scarlet. It will be interesting to see how they survive the harsher climate of the garden, although I will tuck them in a sheltered corner.
These two species are a little taller than Tulipa tarda and Tulipa urumensis which grow in the rock garden. These are very dwarf, the almost sessile flowers sitting snuggly in the leaves – perfect for a very windy garden The soil in the rock garden is very well-drained and very sandy, which helps the bulbs bake in the summer and mimics their natural environment. They’re also beloved by the bumblebees when pollen and nectar are in short supply in cold springs when the machair is late to flower. 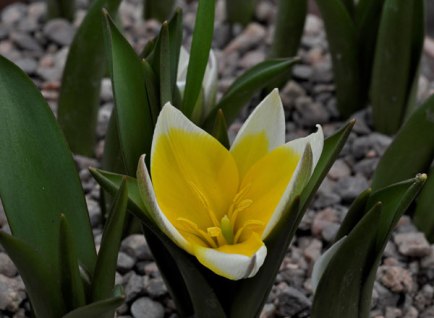 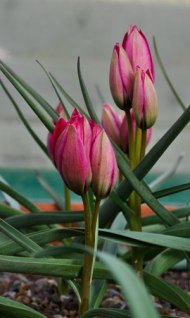 10 thoughts on “In a vase on Monday: Tulip Time”