I rarely manage to participate in Cathy’s In a Vase on Monday meme, but sometimes I feel sufficiently inspired to make a modest contribution. As you can see I am a founder member of the “plonked naturally in a jam jar” school of flower arranging.
Although my small bunch of “daffs” may not have great artistic merit, apart from their intrinsic beauty, they are filling the house with the most sublime perfume.
Narcissi are the stalwarts of the cottage garden from February to May. Tete-a-tete is always first to flower and was the first bulb to be planted in the cottage garden. It came from my garden in Worcestershire along with the jonquil (alas un-named) which also appears in my vase.

In the orchard and the cottage garden the cyclamineus narcissi, Little Witch, Jack Snipe and Jet Fire, are already fading, but the triandus varieties, Hawera and Thalia are still to flower. There are also other un-named daffodils which flower year after year in the cottage garden which delight the eye and perfume the air regardless of their unknown provenance.
More delicate species are cosseted in the alpine house until we have sufficient stock to try them in the garden. N. bulbicodium will be planted out this summer, and if it flowers it will be a delightful addition to the garden. N. assoanus was planted in the garden last year, but it will probably take a little while to establish. This also came from my last garden, but I am not sure whether it will flower this far north. A native of Spain it needs a good summer baking to flower, not a regular feature of Hebridean summers. However, N. canaliculatus is reputedly also difficult to flower, but seems to produce some flowers every year despite the rigors of our climate. Sometimes the plants don’t follow the rules, so it is always worth a try. 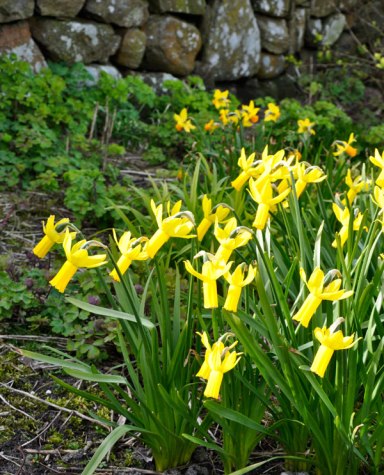 Little Witch with Jet Fire in the background 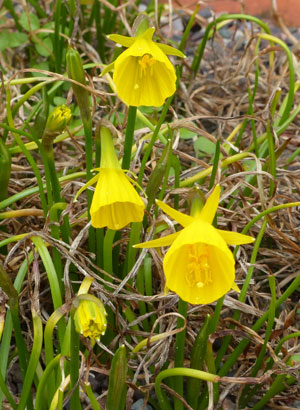 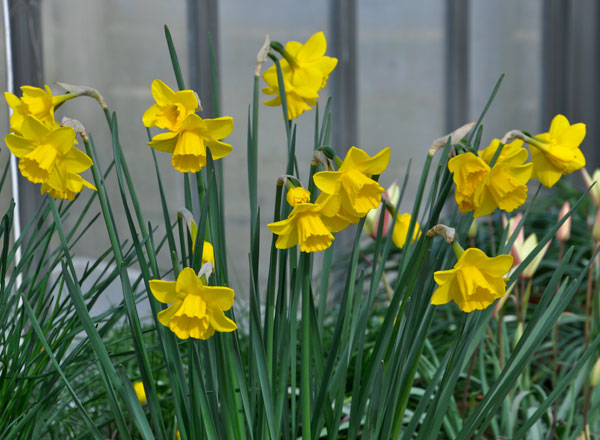