As my neighbour Seamus observed, after a long account about a difficult calving and a tirade about the weather, “it’s January, it rains and it’s windy”. A timely reminder that if you choose to live on an island in the North Atlantic you can’t demand Mediterranean weather. So as Gertie gathers strength to go and torment our northern neighbours, Howling Howard and a chain of nameless tempests are racing across to Atlantic to harass us into February and beyond.  It is January but we were warned that if you wreck the planet it may turn round and bite you. In this part of the world we can cope with the succession of gales and heavy rain, but I have real sympathy for everyone who has been so cruelly damaged by the wind and rain this winter.
I have had an usually himalayan mountain to paperwork to keep me chained to the desk this winter, so while we were plague-stricken I sent my muse on holiday with instructions not to return until Easter. However, I got bored with government forms and computer manuals and summoned her back. So bulletins from the Croft Garden will resume, if only to keep me amused.

Fine days, or brief intervals when the sun appeared, have been few and far between. It has been a struggle to get out and do the regular counts of our wintering wading birds on the beach and the all island goose count next week might be an interesting exercise! However, those tantalising glimpses of magic, when the grey blanket of cloud lifts and a little light infuses the landscape with gold, are the gifts of the weather gods. As much as I love watching the ever changing kaleidescope of light as the squalls come rushing over the horizon and the waves batter the reef, I begin to fidget if confined for too long. It is frustrating when the daily walk is limited to a dash to the shed to fill the log basket or an expedition to dig a few carrots or collect some kale from the polytunnel.

Our supplies of root vegetables and winter greens are rapidly diminishing and it will be a few weeks before the light levels are sufficient to think about starting the early spring crops. The hungry gap is rapidly approaching and the sad array of “fresh” vegetables in the local shops is not inspiring. So I will bank the food miles and we will have to use our culinary skills to eke out the stores. I might even invest in some gro-lights and try some micro-herbs.
Fortunately the Seville oranges arrived last week, so the kitchen has been perfuming the house with the delicious aroma of oranges. Himself has taken over making marmalade, as I always seem to be beset by paperwork in January. I have been musing about marmalade and wondering what influences our choice of flavour and texture. When I make marmalade it is dark, chunky and has bitter under-tones cutting through the sweetness; Himself produces a light golden preserve, with very fine shreds of peel, not sweet but intensely orangey. You may draw your own conclusions. I’m not sure if it works with other citrus flavours, as we don’t see enough to even consider making marmalade. If you are a marmalade maker or just a consumer, you might like to ponder the marmalade mystery.
The garden has been ravaged by the weather, but there are a few shoots emerging, and I hope at least some of them will survive until spring arrives. Unfortunately the mild winters encourage the bulbs to shoot to early and the herbaceous plants never achieve full dormancy. The combination of mild temperatures and a very wet atmosphere is not ideal for the over-wintering plants in the polytunnel or the greenhouse either. It has been too windy to open the vents and so the conditions are optimum for the growth of mildew and sooty moulds. Not great for the plants, but identifying the fungi has kept Himself happy with his microscopes. 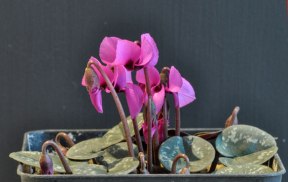 My inner Pollyanna is fighting to get out, and although the February will arrive with a fanfare of storms, the first of the early bulbs are beginning to flower in the greenhouse. When Katharine Hodgkin arrives, I know that the days are lengthening and I can start gardening again.