It is not just the seasons which have been out of kilter this year. I seem to have been doing a Carrollian impression of a white rabbit since Easter. Domestically my life has been topsy-turvy since the builders moved in and seemed reluctant to depart, except when they disappeared leaving me in chaos only to reappear after their “holiday”. To add the mayhem and general pandemonium the weather made gardening more of a challenge than usual. So my wheelbarrow and shovel have been employed mainly in construction rather than horticulture. Fortunately I’ve not been able to write a series of pathetic, moaning blogs as building work put both computers and associated peripheries into a mega sulk.
In terms of the weather I think many of us have experienced an unspeakably awful summer and, to compound the misery, we’ve not experienced the Indian summer that other parts of the UK have allegedly been enjoying. However, sometimes perception and memory can bear scant relation to the facts, so I checked with my friends at the Askernish weather station:
“Despite July being the hottest on record globally,a phenomenon that passed us by as our summer was the coldest, wettest, windiest and dullest on record here at Askernish. As this is an El Niño year so nothing should really come as a surprise.”
It appears that my spectacles do not have a slight rose tint after all
At the end of June, I was beginning to wonder whether any of the plants, in the cottage garden would actually produce any flowers or was I destined to make the most of a glorious display of chickweed and dandelions. Usually by the time mid-August arrives, the cottage garden borders have a veryfin de siècle aura. Blowsy, overblown and definitely hung over. It may have been a slow start by but in August everything was flowering at once in a riotous profusion of colour. More Christopher Lloyd than Gertrude Jekyll, with some of the colour combinations being quite dazzlingly ostentatious. Not at all English country garden, definitely not Hebridean, more Caribbean reggae. 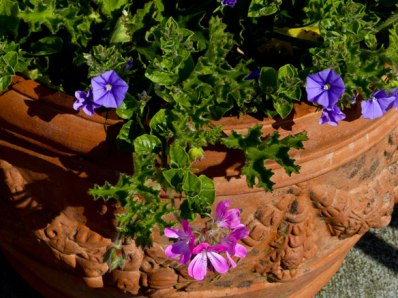 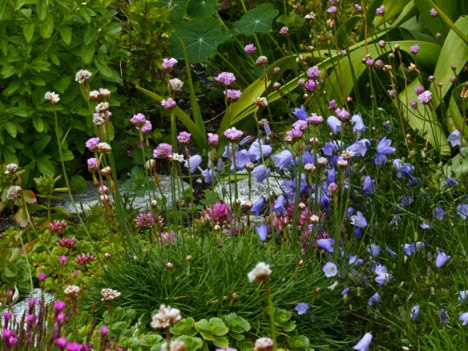 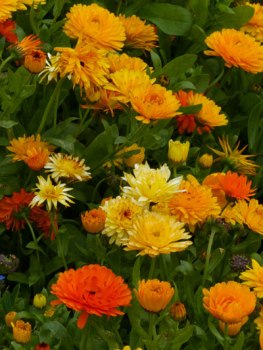 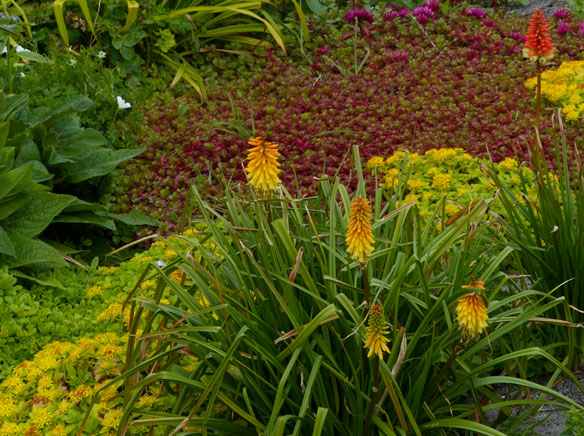 The calendulas competed with the nasturtiums and eschscholzia for vibrant zing, whilst the verbascums and galtonias remained coolly aloof. The kniphofias provided a background of fireworks leaving the sedums to dominate the floor show. The harebells (Campanula rotundifolia) ran riot at the edge of the border and it was about to get nasty with the maiden pinks (Dianthus deltoides) when the sea pinks (Armeria maritima) moved in to create a buffer zone. The horned-poppies (Glaucium flavum), as stylish and languid as a super model, just draped themselves languidly over everything. 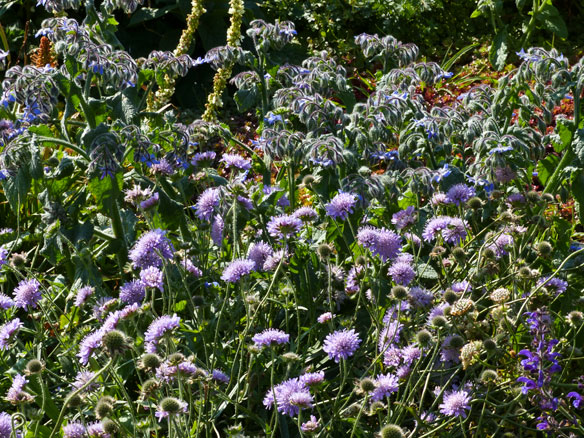 The annuals were more reluctant to participate in the floral extravaganza. The sweet peas awoke like sleeping beauty and began flowering in September, so perhaps the frog who lives in the fruit cage really is a prince. Alas the annual scabious looked pathetic against the profusion of its native sibling (field scabious Knautia arvensis) which seduced every bee and hoverfly in the vicinity despite some stiff competition from the borage. As for the cosmos and nigella, they were obviously too shy to compete.

We are now well into autumn and so far we’ve not had any serious gales. There have been some fine days between the frequently overcast and chilly spells and once again September has been much drier than average. I should get out the secateurs and begin to prepare the garden for the winter, but I am reluctant to cut down the herbaceous plants which are still in flower. At this time of year the garden flowers are the only source of pollen and nectar for the remaining bumblebees and hoverflies, so I will leave the garden to its decadent decay and sort out the mess later. As the hurricane season starts we will doubtless be lashed by the tail of a big Atlantic depression at some stage, but until then my garden is for the exclusive use of the insects.