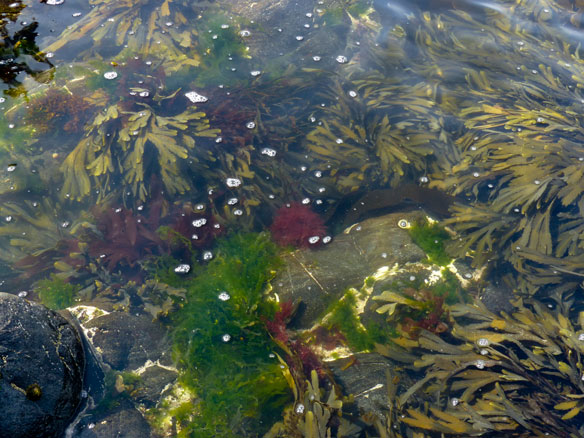 This summer we have had some particularly warm and calm days. On afternoons when it was too hot to garden, seeking just a zephyr of a breeze, I spent my time exploring the pools and rocky shore of the headland. I can devote hours to watching the movement of the seaweeds in the clear water and I’m totally entranced by the vibrant colours. Beautiful sea gardens created by nature.
With the increase in sea temperatures the marine fauna and flora around coasts is starting to change – as creatures from the south move northwards and those which prefer cooler waters retreat north. This summer gave me just a hint of this process in action as we had unusually large numbers of jellyfish in the coastal waters; including the compass jellyfish (Chrysaora hysoscella) which is normally found off the south west coast of Britain. When stranded on the beaches there is no hint of their delicate beauty, but when afloat they become almost ethereal.

The summer days pass too quickly and the autumn equinox approaches. When the pressure drops and the wind whistles in from the west, the local bird watchers start to twitch with excitement, anticipating the arrival of migrating birds blown off course as they move south to their wintering grounds. Leaving the twitchers to dash around after rare birds, I prefer to meander along the beach to see what the tide has washed in. Amongst the debris of plastic bottles, fish floats and mangled lobster creels, tangles of seaweed and crèches of bleached limpet and whelk shells, there is always something interesting and a potential addition to the cabinet of curiosities. Sometimes it is just a piece of driftwood, which if interestingly sculpted by time and tide is a destined for the garden, or a sheep skull or bleached crab claw. On other days, and usually when you least expect it, there will be a piece of whale bone, a perfectly polished piece of quartz, or an otter eating a fish.
This August we are having a foretaste of autumn as the tail of hurricane Bertha has been followed by blustery winds and squally showers. Too early to deliver rare birds, but the westerly winds brought some exotic creatures to our shores. Buoy barnacles (Dosima fascicularis) and by-the-wind-sailors (Velella velella), more commonly seen off Cornwall and the west coast of Ireland, have been washed up on our beaches. These are pelagic species usually found in the warm waters of the Atlantic and the Pacific. Millions of Velella have been stranded on the coast of North America this summer, not an unusual event, but much earlier in the year than expected, perhaps due to the early arrival of strong westerly winds. Indications of a strengthening El Niño or climatic oscillations associated with long-term climate change? I can only watch and wonder as these beautiful creatures appear and perhaps try to minimise the size of my footsteps on the planet.

18 thoughts on “When the wind blows”