The cottage garden and I have reached the stage in our relationship where the honeymoon is over and reality beckons. All was bliss in April, even if the starlings did peck the heads of all the scillas. May was a little more difficult as the herbaceous plants were slow to get going, the weeds rapidly filled the bare patches and the slugs ate every new shoot before it had a chance to think about producing leaves. The chickweed and the nettles made a bid for world domination and I grew grumpier and grumpier as all my time was spent on my hands and knees weeding. My normal Zen contemplative approach to weeding was replaced by an angry seething of discontent. Penance for being seduced by the pictures in the Sarah Raven catalogue and being deluded into thinking that I could create beautiful herbaceous borders too. Such hubris! Oh the temptation of the glossy photograph! I couldn’t even blame the weather, as the spring and early summer have been wonderful – perfect for growing weeds and feeding slugs!
I was tempted to reach for the “Round-up” and order a ton of grass seed or a lorry load of gravel, but fortunately common sense prevailed and I realised that my garden and I had to have a full and frank discussion of our problems. The garden equivalent of my “marriage guidance counselor” is my camera. It makes me look at the garden and the plants in an entirely different way. The weeds and imperfections are still there, but camera is objective, although with selective angles and close-ups it can be made to lie. This had to be a warts and all study, a forensic analysis resulting in an action plan. 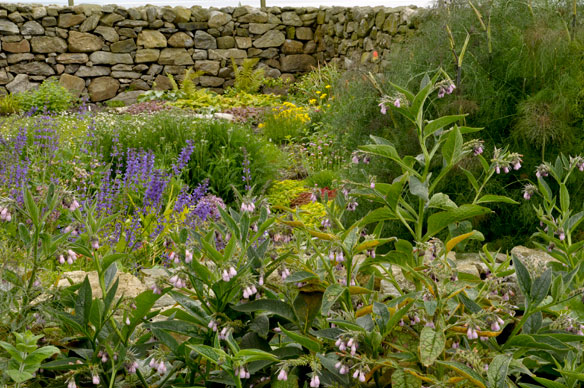 I deliberately chose an overcast day so that I would not be fooled by the effect of the sunlight, so the photographs are deliberately dull. Like all gardeners I am hyper-critical and often fail to stand back and take the long view. So for once a little consideration instead of recklessly reaching for the shears and the spade. 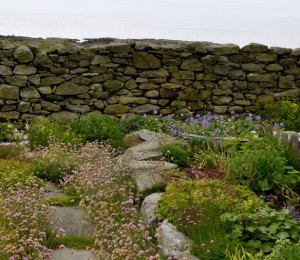 The path to the ossuary bed is getting a little overgrown. Dead heading the thrift will help, but it will need some thinning in the autumn. The raised bed is still “under-development” but is now less of a problem child. 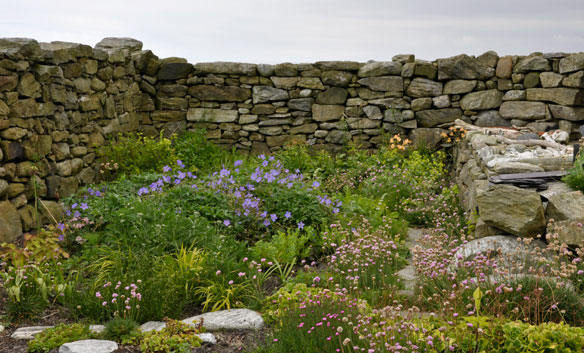 The ossuary corner is still a little thin in places but the thuggish Polemonium has been replaced by Verbascum, which is reasonably slug resistant. The leaves of the Hemerocallis remain a sickly yellow, despite regular dosing with high potash food and seaweed, and refuse to flower. I think these will be on the compost in the autumn. However, the real problem is at the far end of the bed which has degenerated into a tangle of rampant chickweed and Alstroemeria. I have a love hate relationship with this species, I love the flowers, but it is a thug and I always let it get out of hand before getting out the fork and the plastic sack. The time has come for its removal and I vow I will never be tempted to grow it again! I know that it is reckless to keep the Alchemilla mollis, but is such a favourite that I can live with its bad habits. 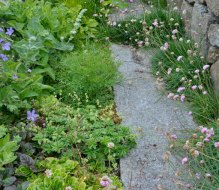 The structure of the herb garden is best described as informal, although it was not  designed to be this relaxed. Predictably the mint has escaped, the comfrey is about to collapse, the buckler leaf sorrel is profligate with its seeds and the chives are looking ragged. So the chives and sorrel will be severely clipped and although it will look dreadful the new growth will soon appear, provided we have some rain soon. As for the comfrey, three plants will have to be removed as they are badly affected with comfrey rust; the fourth has a reprieve as it is a great favourite with the bumblebees. I will probably replace them with either lovage or sweet cicely; I am tempted to try angelica, but this area may be too dry. However, while I’m thinking about it and growing some more plants, the mint and marigolds will doubtless take over the vacant ground – squatters rights! 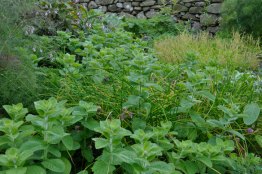 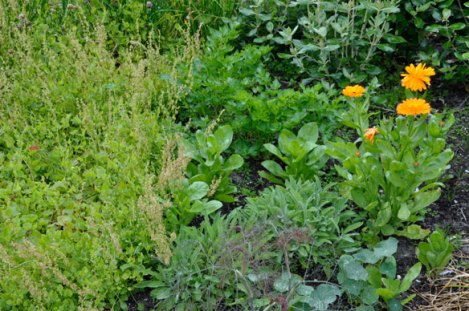 Now we move to the herbaceous borders, the large square border which sits over the stub wall from the herb garden and the long border along the wall on the southern edge of the garden, all of which have their problems.
I hate to confess that the big border also has the Alstroemeria blight. This has to be tackled immediately as it is a major source of irritation. I know it will leave an empty patch, but it has to be better than the current mess. There are a couple of very sad and chlorotic escallonias to remove and a barrow full of borage seedlings along with assorted docks, nettles and thistles to eject.
l still have to solve the problem of how to hide the dying foliage of the spring bulbs. Sowing annuals has not worked as the bulb leaves persist until July and autumn arrives in August. I need to think about this some more – any suggestions would be appreciated.

Apart from the Alstroerias this is not too bad, although the Galtonias look very chlorotic

I still have some gardening dilemmas to solve and I’m still short of plants, although I have some ideas for next year. Apart from nasturtiums and escholtzias I think I’ll forget about annuals, our growing season is too short, and stick to perennials. I have to be more disciplined about cutting plants back after flowering, that way I may have a chance of keeping the garden a little more under control.
Finally after all this angst, I remembered that I’d photographed the garden last June and after looking at the garden in 2012 and 2013 I’m beginning to wonder what all the fuss was about. Just a lover’s tiff!

16 thoughts on “Falling in love again…”