I don’t think that I was ever really convinced that the orchard would be our last project and nor will regular readers who are now familiar with the Head Gardeners modus operandus. So when the new project was announced at Christmas I didn’t know whether to have hysterics or give him a big hug, particularly as it was called the Birthday Project! All credit is due to Himself for the concept, but I have to confess to sowing the seeds of the idea, but as usual I got rather more than I bargained for.
Although it was my declared intention not to even attempt to create a garden around the new house, how could I compete with nature’s garden? There is an area on the east side of the house which was in need of care and attention. It contains the compounds for the bins, the shed, the washing line, solar panels etc. and therefore cannot be grazed and as the bed rock is near the surface it cannot be mown either. For the past five years it has remained an area of very scrubby, tussocky grass. A gardening dilemma of not insignificant dimensions, but not big enough to defeat the croft gardeners. 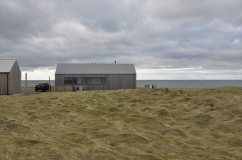 This project was going to need rather more than a shovel and a wheel barrow, so it was down to our neighbour to clear the site with his digger, tractor and trailer. Just in case you are wondering all the vegetation and excess sand was used to help fill the giant hole in one of our fields caused by the blow-out. We started this project during one of the wettest winters on record and at times I wondered whether I might end up with a bog garden. 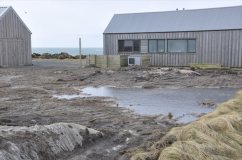 Once the “turf” was removed and it had finally stopped raining we couldn’t resist starting to reveal the rock formations. However, this was put on hold when the builders arrived to lay the foundations and build the base. 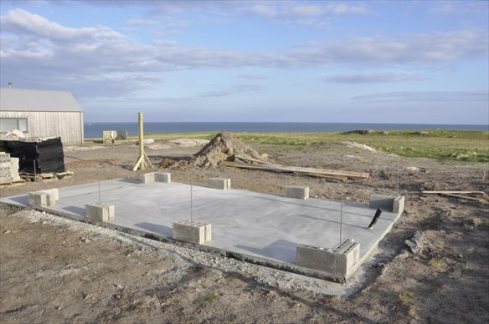 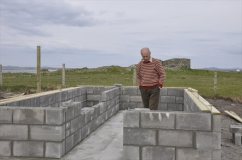 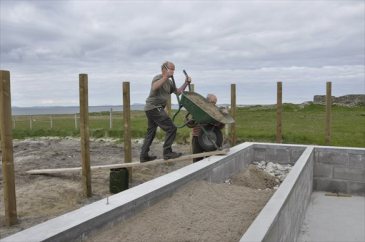 The next stage was to fill the raised bed with rocks and sand and I must pay tribute to our friend Mike who devoted most of his holiday to helping the Head Gardener – my contribution was to make cakes! It was really getting exciting now.
In late May the contractors finally arrived and removed stage two from the shed and put it together. A bit like expensive flat-pack furniture! 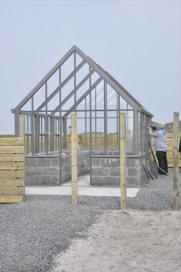 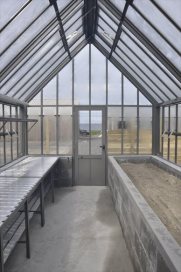 The Head Gardener completed the fence (wind protection) and all we needed now was the official opening. Now as this was an exceptional present for a landmark birthday we needed someone very special to do the honours. Not just the President of the Scottish Rock Garden Club, but a past President too, who just happen to be our oldest friends! Cutting the ribbon was followed by some ceremonial rock excavating and a splendid dinner. 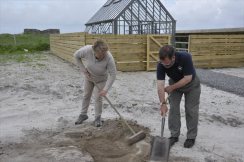 So a very special thank you to Mike, Ian, Carole and the Head Gardener for creating the perfect Birthday Project. Now let’s garden.

18 thoughts on “The Birthday Project”