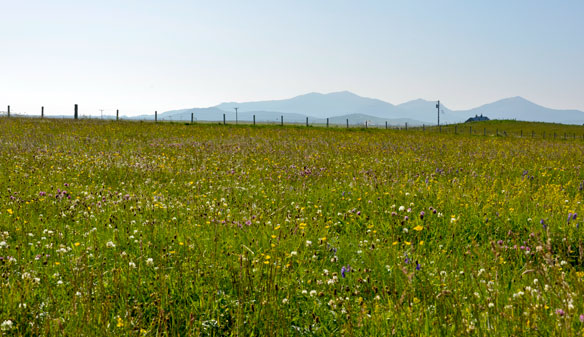 The machair in flower is one of the best wildflower displays in the British Isles and at it’s peak the carpet of flowers is breath-taking. It inspires my gardening but at times I wonder why I bother as nature makes a much better job of it, the plant selection and colour palette is stunning and impossible to emulate. As the machair is literally on my doorstep, I’m not sure why I’ve not devoted a series posts to this magnificent floral spectacle.
Machair is the Gaelic word used to describe a flat plain or field but it is also used to describe a specific type of dune pasture formed from shell sand on exposed coasts where it is too windy for high sand dunes to develop. It is low lying, just above the water table and retains it’s calcareous character, in a wet oceanic climate, through constant top dressings of blown sand.
Globally, machair is an extremely rare habitat, about 19,000 hectares, 70% of which is in western Scotland, mostly on the Outer Hebrides. It is internationally recognised for its  for its flora and birdlife and is designated within the suite of Natura 2000 sites, including Sites of Special Scientific Interest (SSSI), Special Areas of Conservation (SAC) and Special Protection Areas (SPA). I am somewhat bemused as to why not one square inch falls within a National Park or National Nature Reserve. There is an RSPB reserve at Balranald in North Uist, but otherwise these areas of such great conservation value and beauty only have limited protection.
South Uist has the most extensive cultivated machair system in Scotland, extending the whole length of the island and up to 2 km inland. This area is very diverse and and includes extensive wet areas –  machair lochs and wet heath and marshes. The machair has been farmed since the Neolithic and the traditional system of extensive grazing and rotational cultivation, is key to maintaining the biodiversity of this rich and complex habitat. It is a very fragile ecosystem and is dependent on the the low input agriculture used in traditional crofting. If the land is over-grazed or cultivated, the fragile vegetation soon becomes eroded by the wind and if it is not grazed or cut the grassland soon becomes rank.

Our croft is at the northern end of this area my knowledge of the plant communities on the croft and the area of machair which is just to the south of us, the Iochdar Common Grazing, is still rudimentary. The Common Grazing is a large unfenced area where the local crofts have strips of land which are used for rotational cultivation (small oats and rye for cattle food) and grazing.
Machair a generic term and consists of a complex of micro-habitats. The flora varies depending on how the land is managed, the soil composition, the level of the water table and a host of other physical and biological variables. Some areas are more prone to flooding in the winter and tend to stay moist throughout the summer, others seem to be dry throughout the year. Although there is great diversity, many of the plants are common throughout.
I have been looking at the plants on one particular part of the common grazing for a couple of years. It is on the west side of Loch Bee and although it is not cultivated, it is grazed by both sheep and cattle. It has both wet areas and dry sandy mounds (dune remnants) and is botanically quite diverse.
At these northerly latitudes the spring weather is unpredictable and  has a profound effect on both the timing and quality of the flowering. It is also interesting to note that some species seem to predominate in certain years and then go quiet. Each year is different, and although it is only the start of June I am already seeing differences from previous years.

7 thoughts on “The Machair in Flower”