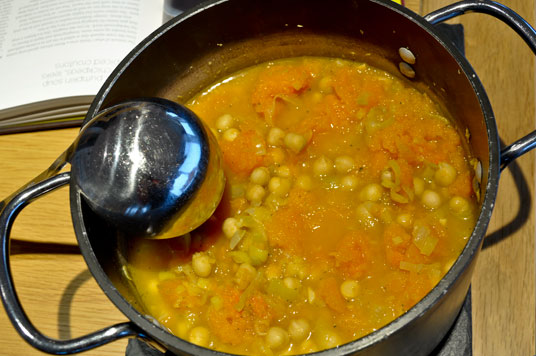 The season of the great darkness is upon us and the time of great hunger approaches. Whether the hunger pangs are caused by an empty vegetable garden after the December storms or the mortification of the flesh (January diet) after the seasonal indulgence, I prescribe soup. For those who have stretched the family budget or the waistline it is economical and a healthy option, if the cream and cheese are left in the fridge. After tea and toast it is the ultimate comfort food, warming the soul and soothing the stomach. There is nothing nicer than a steaming bowl of soup after a blustery walk or some winter gardening, it is also great for “man flu” nurturing both the afflicted and the suffering spouses.
Amongst my collection of witty, erudite and informative posts, strangely it is the recipe for celeriac soup which stands head and shoulders above the intellectual elite in the popularity poll. I doubt if I can produce another soup recipe which will be as popular, but the latest version pumpkin and chickpea had a good reception in the croft kitchen. There’s a pot on the hob if you’d like to give it a try.
This post was originally called “Soup for the Solstice” but it missed the deadline, and was left to languish in the drafty corner to evolve. As soup is for sharing, like all good leftovers it was resurrected and served in a new form with parable as a garnish.
The reciting of the heroic sagas, in the intervals between the feasting and general mayhem is an integral part of the winter solstice celebrations. Unfortunately bards have a bad habit of not realising that snores are not always a sound of appreciation, after all too many iambic pentameters in rhyming couplets can be soporific after a few horns of mead. So to lighten the mood, if not the moral tone, there is always time to squeeze in a wee folk tale.
There are many tales involving soup and I particularly like stone soup – a universal story involving either faerie folk, wandering soldiers or itinerant charlatans and a wealth of interpretations. However, I recently came across this Chinese parable which I like even more and is warming and comforting, just like soup:
“When a man asked God about heaven and hell, God first shows him a land where all the people have a delicious meat soup. But they have spoons longer than their arms, so they go hungry and suffer in hell.
Then God shows the man another place where everyone has the same wonderful soup and same long spoons. But here they use the spoons to feed each other. This is heaven.”

13 thoughts on “Soup for Solace”