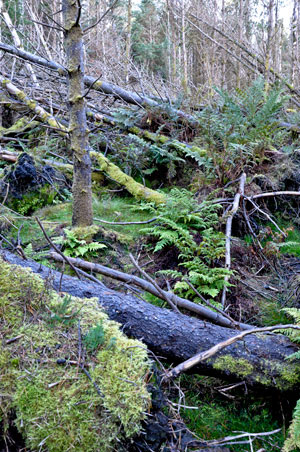 Autumn in the Outer Isles can be somewhat blustery and at times storm lashed. Each year we get our share of  violent storm force winds (Force 11 – winds over 64 mph) when it’s normally dinner by candle light and an early night with a hot water bottle.
The winds can be very destructive and, although the bane of every gardener’s, crofter’s’ and fisherman’s life, they helped save the island from being covered by the conifer plantations which blighted so much of Scotland. However, we did not escape entirely as there was some planting by the Forestry Commission and other land owners at the end of the last century. Many of the Commission’s plantations were experimental and slowly these have passed into community ownership. These are now being transformed into an educational and recreational resource for the benefit of local communities and visitors.

Langass Community Woodland on North Uist is one of our regular haunts, and although primarily Lodgepole Pine and Sitka Spruce, it supports a diverse community of mosses, lichens and fungi. The trees were planted in 1969 but in 2005 and subsequent winters many of the large trees have been blown-over by the gales. Some of the fallen stands of timber have been partially cleared creating sunlight mossy glades where ferns and wood sorrel flourish. These new open areas and fallen timber have done much to increase the biodiversity and landscape value of the woodland.
The island landscape is sculpted by the wind, its the physical form changing over millennia and sometimes more dramatically in the lifetime of a storm. Such elemental forces may appear to be superficially destructive but they are also creative, forming new habitats and acting as one of the many agents of evolution and natural selection. 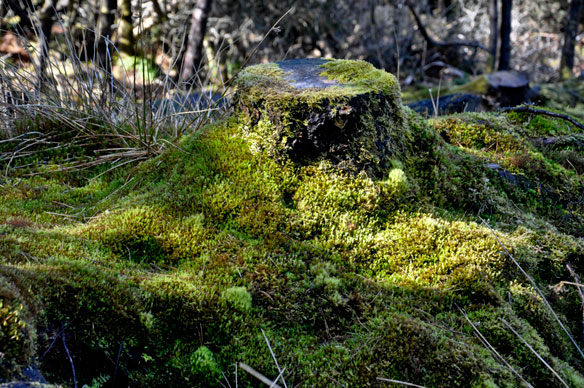 9 thoughts on “Winds of Change”