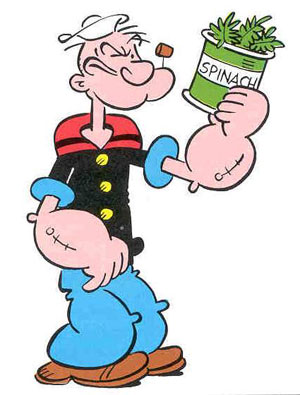 Spinach is a great leafy vegetable and one of our staples in the early spring and winter. I grow two varieties of baby leaf spinach, Ottawa and Amazon, both suited to early and late sowing and producing an abundance of leaves either for salads or cooking. I sow my first batch in the polytunnel in February with a repeat sowing in March, and if I have space an autumn sowing in September with a final sowing in late October. The September batch will give me an early winter crop and although the final sowing will be slow to germinate and hardly grow at all in the winter, it will start to produce a crop in early March as the day length increases. I don’t bother with a summer crop, mainly because there are other lovely vegetables to eat, but in my well drained soil it tends to bolt very quickly and the leaves get shredded by the wind.
Spinach has a well deserved reputation as a super food and for some of us will evoke childhood memories of the famous cartoon sailor Popeye and his favourite food which was the source of his great strength.
The leaves are rich in iron but it is bound to the oxalic acid in the plant which makes it difficult for the body to absorb. The high iron content of spinach is part of the Popeye myth, however his creator E.C. Segar promoted spinach for its vitamin A content and not its iron. Spinach is also rich in vitamin K and provides a healthy amount of vitamins C, B2 and B6. Although the iron in spinach may not have been responsible for Popeye’s biceps, recent research suggests that the nitrates it contains promotes muscle growth.
There is always an abundance of reasons why we should eat our greens, but however much you might love Popeye, spinach has a bad reputation as a slimy, watery, bitter vegetable. As ever the secret is in the preparation and the cooking.
To be at its best it really has to be cut and cooked on the same day, but if you don’t grow your own try to buy unwashed spinach. The leaves will need a good rinse in cold water and draining to remove all but a surface coating of water – a salad spinner works really well. If the spinach is too wet it will end up slimy and watery. It needs minimal cooking and gentle treatment, think seconds not minutes! I usually add the leaves to a large saute pan moistened with a drizzle of oil or butter, cover and cook for less than a couple of minutes, removing the lid for the last 30 seconds. Just enough to wilt the leaves. There should not be any excess liquid, but if necessary drain in colander. If you have a large amount you may need to turn it with some tongs during cooking. Prior to adding the leaves you can gently cook some chopped garlic, grated ginger, grated lemon zest or finely chopped lemon grass. For a spinach purée, I blitz the leaves in the food processor after washing until finely chopped, and then cook, stirring in some crème fraîche and grated nutmeg before serving.
I tend to save the small leaves for salads and find that the large more matures leaves are better for cooking. Very large leaves are either best shredded before cooking or tied as a bunch and dunked in a pan of rapidly boiling water for 30 seconds.
In the spring, baby spinach leaves are invaluable as a salad base and are robust enough for a hearty warm salad, perfect for lunch a on chilly spring day. I’ve added one of my favourite recipes, with some suggested variation, to the Croft Kitchen recipe collection.

10 thoughts on “Spinach and the Popeye Myth”