The potatoes are in sacks under the bench in the shed, the garlic neatly platted and hanging above, soon to be joined by the onions which are drying in the polytunnel. There are boxes and boxes of jam and chutney and both freezers are full to bursting point. Autumn has definitely arrived, complete with the equinox gales, and there is a feeling of contentment in knowiledge that the garden has provided us with a good harvest to see us through the winter. It is so much more satisfying to reach for a jar of home-made chutney or retrieve the ingredients for a hearty vegetable soup from the freezer or the shed than to go to the supermarket. This is not just romantic idealism it stretches the family budget, reduces food miles and will taste better than anything you can pull off a shop shelf.
This year has been our most successful vegetable growing year so far – a combination of good weather, a soil that is improving year by year due to copious applications of seaweed and well-rotted manure and a slow ascent up the learning curve. Overall the lack of rain had little effect on most of our crops but in future I will increase the amount of watering in dry periods. Enriching the soil with organic matter certainly helped but there were times when I felt that watering my sandy soil was like flinging planets into a black hole.
So here is the report card for the vegetable garden:
Beetroot – I plant plugs raised in the ploytunnel in modules and normally have a good crop. This year the growth was slow, almost certainly due to lack of moisture, but we got there in the end.
Broad Beans – I grow my plants in cardboard tubes and then plant in the garden in early May. This year I had problems in germinating the seed (my fault for using old seed) and when I eventually had some plants they grew very slowly and flowered late – so I did not expect a good crop. A combination of lack of moisture and cool temperatures. The bumblebees obviously felt the same and did not appear until June – so in the end the bees had the pollen and nectar and I had a bumper crop of beans.
Carrots – normally one of my best crops – I sow my seeds as soon as the ground is warm enough (10°C) – but this year I could not get the seeds to germinate until July! It was so dry that I could not keep the top few centimeters of soil moist enough. So a late harvest of carrots this summer. They’re still growing and will be left in the ground until required. 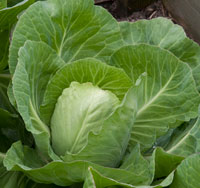 Cabbage – I grow the summer variety Greyhound which in previous years has grown well and lasted well into the first part of the winter. This year they grew beautifully, then split, the water got in and they rotted! This has never happened before and I am more than a little puzzled!
Fortunately it ruined any prospect of making to make sauerkraut. 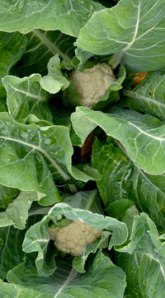 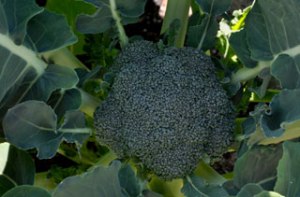 Cauliflower, calabrese and broccoli – oh I was proud of these even if they did all come together! Not sure what went wrong with my careful schedule of succession planting! I will probably not grow the tender stem broccoli again – a victim of its own success – it was very prolific but the spears became flowers very quickly.
Celeriac – a new crop for 2012 – it has grown very well and produced good sized roots. Unfortunately they are a little hollow – lack of water again. However still good enough to eat and I am encouraged to try again.
Chinese cabbage – this is an early and late crop – it will bolt if it gets too warm. It grows rapidly and produces enormous head of crispy crinkly tightly packed leaves. It has to be cut as soon as it is ready but keeps very well. To avoid the cabbage glut you only need to grow 3 or 4 plants at a time.
Courgettes – prolific but tasteless so most of the fruit ended up in cakes! I suspect the variety rather than growing conditions. 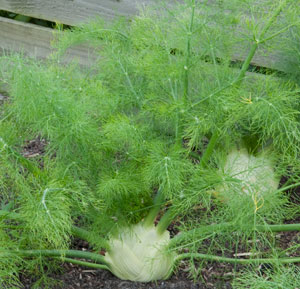 Florence Fennel – this is one of my most reliable summer crops and one of my favourites. 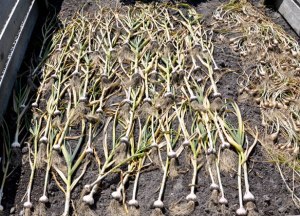 Garlic – the quality of the crop depends on the weather in May last year it was wet and windy and destroyed the crop. Always a gamble but worth the effort to eat fresh juicy cloves.
Jerusalem artichokes – the jury is out on these as I’ve not dug the tubers yet! The plants grew well and were over 6 feet tall, so I am quietly optimistic.
Leeks – my soil is not really suitable for growing very good leeks, but if I plant early I usually get a respectable crop. In my native county they would be laughed at – “what d’you call these lass pencils?” I prefer to think of them as gourmet leeks.
Onions and shallots – a good crop of onions but the shallots were disappointing. They were rather small and a high proportion had some evidence of neck rot.
Parsnips – alas very few germinated and the dozen are so which have grown may not we worth eating!
Potatoes – a good crop despite the drought. Certainly enough to see us through the winter.
Sugar snap peas – reliable and prolific. Unfortunately they do not freeze well, but there is always a market for the surplus.
The garden is now looking rather empty and the beds are ready for their winter dressing of seaweed and manure. There are still a few crops left – the winter brassicas, calvo nero (Tuscan kale) and leeks – all covered to give wind protection. There is still plenty of work to do outside, but it is a case of dodging the showers and looking for the gaps between the gales! It may only be September but it is time to think about next year. There is nothing nicer than sitting by fire on a stormy afternoon with a pile of seed catalogues.