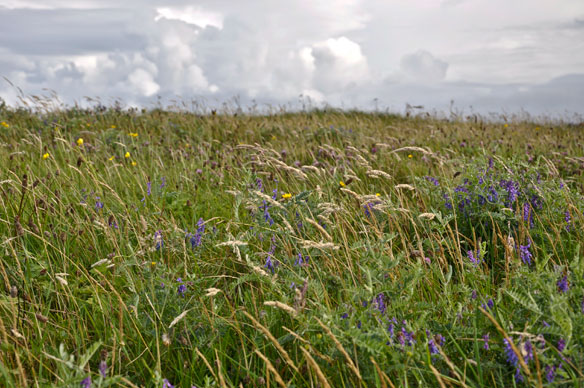 I should know better by now but the arrival of autumn always takes me by surprise.  The gold of the buttercups is fading and the bleached heads of the grasses are a pale cream highlighted by the richer hues of the red clover. Russet brown seed heads of the wild angelica stand tall like skeletal acacias in a Lilliputian savanna where the last meadow brown butterflies still dance in the sunshine.

The meadow pipits and the skylarks have gone and each day small parties of swallows swoop over the fields as they move south. Gone too are the short-eared owls who worked tirelessly to feed their brood and were the most effective rodent control operatives I have ever seen. The stealth bird and his mate still quarter the croft each day and delight our visitors with their elegant effortless flight. A pair of merlins, small wizard falcons, have returned to harass the starlings and like synchronised swimmers they perform parallel acrobatics as they twist and turn until the starlings descend to the cottage roof to chatter hysterically.
Gone are the heady scents of summer flowers leaving the tang of salt on the wind and the pungent aroma of seaweed. Peat smoke permeates the air as stoves are lit to combat the coolness of the autumn evenings and as the days shorten and darkness returns lights appear in the croft houses.
There is change in the air. The beaches are thronged with life and as busy as an airport departure lounge on a holiday weekend. Herring gulls probe busily among the kelp whilst their smaller brethren, common and black-head gulls, daintily pick up titbits from the surface of the water as the waves stir the weed. Sandpipers are spread all along the shoreline – sanderling like small clock-work toys run along the water’s edge with the more sedate dunlin feeding purposefully amongst them. Rotund ringed plovers dash about higher up the shore where the oystercatchers doze oblivious to the feeding frenzy on the beach. Some of these birds have bred locally; others have traveled from Iceland, Scandinavia and the high arctic; many will stay on our beaches and the rest will fly further south to winter on warmer shores. There is a mood of frantic activity, peeping chatter and restlessness as they feed to lay down fat for the winter or the long migration. These are just the first arrivals and as the equinox approaches more wading birds will arrive to throng Ardivachar beach and entice me to wander from the garden to watch the birds on the other side of the wall.

I may not have any trees to tell me when it’s autumn, instead I have the birds. There are over 60,000 pairs of gannets breeding on St Kilda and I think most of them must fly past my window as they move south during the last few weeks of August. Beautiful white birds with dark wing tips, stark silhouettes against a dark blue sea, arrow straight with powerful wings. Non-stop executive travel.

7 thoughts on “Arrivals and Departures”